As we can see from the alchemica markets, our economy can’t handle the level of issuance being given out at the moment. In order to have a sustainable economy we need token sinks to be equivalent to token issuance. We’re all hoping for PvP/PvE to have significant alchemica sinks which will make the tokenomics at lot more viable, until then though we need to pull some economic levers or alchemica will continue to drop 20% a week until it reaches gas prices.

As you can see, channeling issuance far outweighs harvester issuance. Our best bet to stabilize the economy is to temporarily reduce channeling issuance and incentivise people to earn their alchemica through farming. Farming is currently the biggest alchemica sink we have, it takes 100-300 days for alchemica sunk into farming to be issued back out. This is the time we need to allow PC to get combat released and to a point where we can handle such large levels of issuance.

With these 2 measures I think we can stabilize our economy until combat release. After some DMs I’ve added some common disputes and my responses below so read those first and I look forward to hearing your thoughts frens.

D: This is a nerf to gotchi owners.
A: If we do nothing, channeling is currently being nerfed 10-20% per week in $ terms from Alchemica prices dropping. Soon channeling will disappear entirely as it becomes unprofitable due to gas prices, we’re already seeing this in times of high gas prices. By cutting the issuance and incentivising spending we are attempting to outperform doing nothing and hopefully INCREASE gotchi owners channeling $ yields.

D: We shouldn’t mess with Pixelcraft’s tokenomics
A: Yes we should, it’s exactly what the DAO is for. Dan said this himself:

There might be a non-intended side effect to this plan.
The rental market might come to an end for a lot gotchi owner as no one is willing to rent a gotchi that can’t even cover the gas cost. (cutting channeling reward by half, assuming alch price stabilize as a result of this cut)

If original intent of the gotchi owner is to buy a gotchi and earn passive income via renting. And they can no longer do that, I am not sure why they would keep holding the asset.
(I just bought a 1060 kinship gotchi for 557 ghst. If this plan goes thru I am sure I can buy another one for even cheaper)

I am not saying I am against the plan. (Even tho I am not really into farming. I have only 1 parcel for farming which came with harvesters when I bought the humble for channelling) If alch price continue to drop they will face the same issue anyways. But this seems to speed up that process and create a sudden surge in selling of gotchis/humble (unlike plans like the forge which attempts to fix a problem without doing that to wearables)

We have to be honest about the situation we’re in. If we do nothing and carry on as we are channeling will stop soon anyway as yield falls below gas prices. This is a temporary fix for the economy to get us more stable where channeling will return to normal again. The longer we leave it the harder it will be to recover so although it might temporarily sting a couple of areas of the economy, like channeling and renting, everyone will end up in a better place.

We could also look at enabling spillover, with hotzones and cartridges, which would help the rental market and also help lower level farms.

Like I said I am not against the plan. I am just saying a slow bleed might give us more time to come up with more sinks. Whereas this cut a lot of things short immediately

If we leave it a month we could drop another 80% and require a 4x just to get back to where we are now. We’re not anticipating any more sinks to be introduced until combat, which could be 3-6 months away. Meanwhile, all the time land, alchemica, gotchis and farming installations are losing value.

I will post this in discord. Hopefully we can get more feedback from non-farmers (channel / renters)

Yeah I mean that’s fine by me, as long as the issuance gets cut for the next couple of months I’m fine with that. I thought this way may alleviate any fears it wasn’t going to go back to normal but if the community is happier with a straight reduction in frequency to once or twice a week I’m happy with that too.

I think that it’s more likely to get support, but maybe others see it a different way. I haven’t done the math, but let’s say your proposed change is a 50% nerf. How much are people getting from channeling on average right now? 70 cents? To reduce that to 35 cents and have people paying 5 cents in gas is a lot. It would be much better to reduce the channeling cooldown to 48 hours instead of 24 hours and keep the 70 cents instead imo.

I have 1 question tho. Why there is no nerf to farming in this plan? I can’t work out the math. Is there a special reason I didn’t get / misread from the plan?

i.e. why is farming being used as a reference point for modifier

or sell their assets

I guess that is true for a few months.

But alchemica sink for farming is 50% since you can unequip
and every upgrade increase production further.

In some games the ‘Bounty drops’ (channeling for us) is dictated by in-game events; changes in environment, lore based, phases of activity

Imagine a gravitational pull on the Gotchiverse which waxes and wanes. The yield would be correlated to the time of month rather than a consistent yield. The ‘pull’ or other mechanic could be adjusted to disburse specific amounts

Absolutely, great idea to tie it to some lore. We need to be in the habit of using levers like this so when the economic situation isn’t good, we as a DAO can help and when things are good then by all means let the UBI fly.

I hold gotchis, and I hold land, and i am big also in farming (building up 2 spacious). I channel my own gotchis, i dont rent them.

I reinvest all the alchemica back to farming or i craft tiles (beautify). I do not sell shit. I think farmers are biggest alchemica bulls, as they believe in alchemica future. I dont think farming profits should be cut (besides, farmers have invested a lot of capital to building up the parcels).

The worst thing from farmers perspective is, that PC keep inflating the price of decorations / tiles. Hallowen decorations are very pricey in alchemica terms. Even that i build up my parcels, i can afford less and less with alchemica craftingwise…thats bad progression.

I would love to hear from PC what is internal timelime introducing alchemica sinks.

We have no other plans….and this roadmap could be as far as one year from now, with only hope, that battle release will be great sink.

If we decide to slash channeling, i would suggest:

In my all time favorite fantasy series, Dragonlance, they had three moons, the phase of the moon determined the strength of the mages who channeled it and they had different rates of change.

What if the Gotchiverse has four moons, and their phase affected the rate for that token?

My source of idea, in case you’re pen and paper RPG illiterate 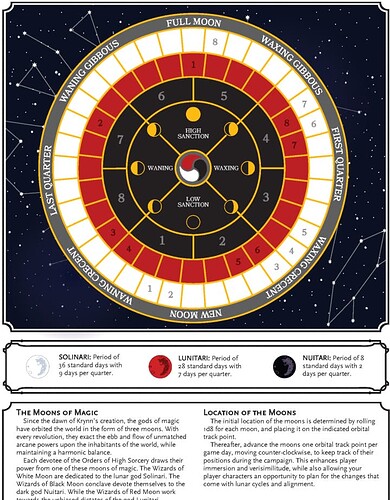 so are you proposing gotchis have something like different zodiac signs?

Channelling rewards were already cut in half.

More like the flow of alchemica through gotchis is determined by the phases of the moons.

I’d have suggested going further with zodiak signs, but I didn’t want to get shut down for “too complicated”