We have the bullets, But now we need a gun!

We all know that we already have some games developed on top of Aavegotchi protocol and some of them are ready to host events! and even more games are currently being developed by the community devs. But with the lack of long-term support and attention to each of them individually will lead them all to death unfortunately!

What problems mainly is Aarcade trying to solve?

Artists:
Artists may benefit from everything on the platform as game developers except for the on-chain events (duh?)

But with a feasible project plan as this we’re going to easily achieve in a progressive way. 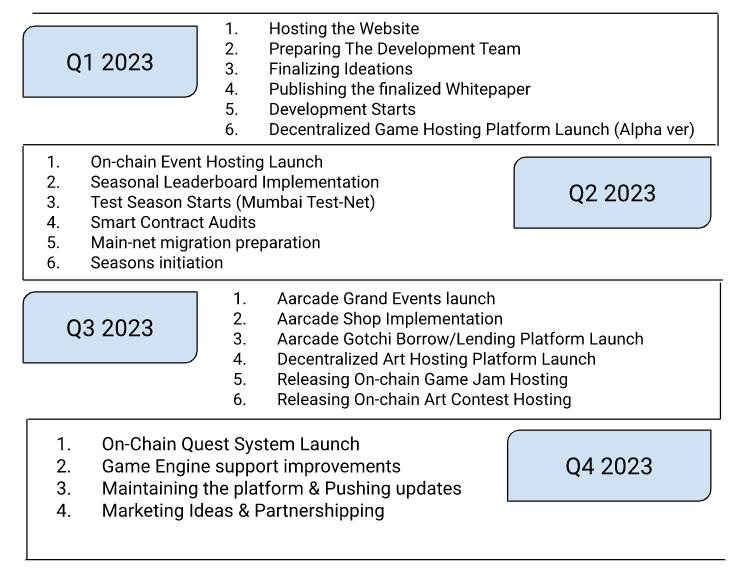 Let’s discuss about the project and the opportunities you think it could provide for the whole community and for the Aavegotchi project and how much supportive you are for it’s development!

If you want to dive deeply into the lighpaper or a brief introduction Document. There you go:

ATF Aarcade Introduction We have the bullets, but now we need a gun! Aarcade opens the gate into the limitless utilization of the Aavegotchi assets. 1- Brief Introduction Aarcade is a decentralized Aavegotchi Game, Art and event hosting platform...

ATF Aarcade Lightpaper An introduction to Aarcade game and event hosting platform! Care comes from caring, Aarcade demonstrates that Aavegotchi games and mini-games matter! Introduction Games are the most effective and fun way to add utility to a...

If you have any Ideas regarding these docs feel free to DM (shah#0369) in Discord as well.

As everyone is concerned about the Alchemica Sink ideas these days. I believe this Idea that I came up with recently on the Aarcade platform could potentially be one of the main sources for that! let me tell you guys how.

Aarcade is a great place with lots of incentives for it’s users. If some of them could be unlocked at a certain level or leveing could lift some limits for them could be a great way to encourage everyone to level up on the platform and spend their alchemica on the platform for return of some Boosted xp per action. Here are some examples:

The ratio of Kek/Fud is around ~7.6 at the moment and with the consideration of Kek being the highest boost (150%) we can use the Floor of that ratio (7) and this way the calculated boost amount based on this ratio for Fud/Fomo/Alpha will be more efficient to use on the platform and could help to increase the price of these token slightly. (e.g. Kek = 150% (Highest Fixed Boost, Fud = ~107% (Based on Kek/Fud Floor Ratio (7) (Formula = 100+(50/7))

There are so many other activities mentioned in the lightpaper and maybe you guys can suggest some of them to be included and be scaled on a level basis.

This is all great stuff, but like the forge, needs to be tied in with the other good well thought out plans, so they are a part of the same plan.

I think we need an open source materials aystem of erc 1155s, that ties everything together.

I also believe erc-1155 will change lots of things as well, but we don’t have to wait for that to start building our great ideas. We need to team up and form the development team for our community projects and use the treasury funds to compensate developers before this bear market sucks all of our treasury assets value. It’s not too soon at all, It’s not too late neither. The time is right now, as soon as possible.