Issue
Most player won’t only play with one Gotchi. One day, they may want to play a ranged style, another day they want to fight in melee and other day they just want to collect Alchemica with big carying capacity Gotchi.

It will be hard for the player to build long term reputation because each time he change the Gotchi, his name will change as well.

Idea
We should display the name based on the player address instead of Gotchi.
We could also display both at the same time.
For the chat, only player name would be displayed. 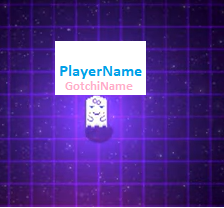 I’m curious to know what others think about that.

In any RPG, accountability for ones social behavior is key. This idea actually does as much to fight bots,. as fighting bots does.

Your discord handle should be attached to the gotchi. We limit people to one gotchi in realm at a time, prohibit botting, but allow multiple rentals.

I propose we make the pilot(?) names be toggleable. It’s a lot of clutter to have both, but we should be able to toggle, to see who were are actually talking to.

The simplest way to enable this is to simply leverage the roles system on discord to ties wallets to handles. Get a new wallet? Go register again.

I’m not sure that forcing people to use their Discord name is the way to go. Not everyone is on Discord.
But we could think of a system to register a name for an address.

We could use the “kinda” same system that we currently use to change the name of a Gotchi.
A smart contract would store the player name associated with his login address.

Yes… registering a name for your wallet is fair, as long as this is on chain, as we can go back and see the name changes. One should be able to be pseudonymonous, but one should also be accountable for their behavior.

If the name is tied to the address, even in situations where someone is using fonts or whatever to spoof someone’s name, we can check the gotchi name vs name and address, and confirm who was really the gotchi pilot.

On chain of course

A very cool idea. I don’t think we have to make it compulsory to link a discord name to play but could treat it as player “verification” that can entitle reputable players to certain benefits such as:

Is an on-chain wallet/name registration the way to go though? What’s the process for preventing people from generating mass discord handles and addresses and registering those? Can we build in a bot in the contract that searches discord/DAO for contributiions/activity from that discord handle?

I really like where this conversation is going, and agree that I will be using many of my Gotchis in the Gotchiverse but would like to be recognized as myself for social reasons. Also, when someone is borrowing my Gotchi others in my Guild, or all of the Realm have no way of knowing if it’s me playing.

Defiantly would be a nice feature in pvp’s or other utilizing games, where we are as summoners bring up the players(gotchis) to the battlefield.
But it’s not a top priority feature at all, but could be useful in the future.