Edited 25 Nov: Updated to reflected updated scaled back recommendations from The Forge Team

To go along with the development of the new wearables forging mechanic, the Forge Team is planning to propose the release of an additional 6,011 2,158 wearable cores (7% 2.6% increase in core supply) to approximately coincide with the release of The Forge. Along with generating revenue, these additional cores will help to balance underserved slot/rarity combinations and generate liquidity and initial excitement for forging. Our initial idea is that the cores would be distributed via GBM auction.

We have created a document we have dubbed The Forge Core Emissions Framework that serves as a guide for the DAO to be able to manage wearable emissions responsibly in the future.

The supply of cores, as defined in The Forge Litepaper, is the lever by which the protocol controls how many wearables can be forged on a rarity and slot basis. We are proposing these three key ratios to be set by the DAO and used to govern the emissions of cores in the future:

The additional cores proposed will not fully achieve the slot balance listed above, but it will move the needle significantly in the right direction towards achieving a long-term balance.

For those who are interested, please review the full The Forge Core Emissions Framework document as well as our Core Framework calculations sheet for a full explanation and breakdown of the slot/rarity combinations we are suggesting for release, as well as our reasoning for how we arrived at the numbers we did.

All comments and feedback are welcome. We are anticipating submitting a sigprop within the next 1-2 weeks.

Thank you guys for putting in all this work!

Something I noticed that I disagree with is that you plan to double the relative amount of cores for the rarest slot. Is there any particular reason for such a big shift? 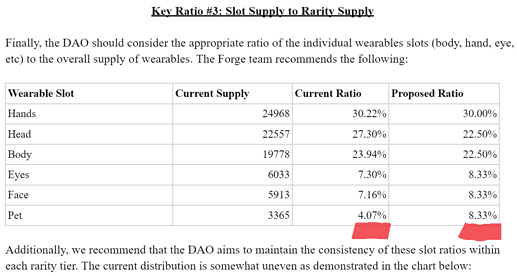 Hey fren! I think it’s a valid point. It’s really up to the community how best to proceed regarding the balance of slots. We were looking to put something out there that was simple and flexible for a changing meta as a starting point, but are definitely open to making adjustments.

One thing I will point out is that the pet slot is more rare overall mostly due to the fact that there don’t happen to be many pets at lower rarities - for example, pets are less than 3% of commons right now but 8% of myths and 13% of godlikes. That tends to make it rarer in the overall sense, but they’re not rarer at higher rarities. Those are the types of disparities we’re hoping to close and to also capture some of that demand from underserved portions of the market.

I liked the idea of introducing new cores in order to protect investors from a fomo induced pump and dump. Not adding new cores would increase the value of existing wearables, as their cores would be needed to craft some of the new wearables. So a wearable run on the bazaar, fueled by fomo and speculation, could cause high price volatility, and end up reking some of our DAO members. Hence, I thought the plan of introducing new cores is to counteract this phenomenon to keep prices relatively stable.

One thing I will point out is that the pet slot is more rare overall mostly due to the fact that there don’t happen to be many pets at lower rarities - for example, pets are less than 3% of commons right now but 8% of myths and 13% of godlikes.

And that fact is why common pets, despite being common, demand a high premium on the open market. If common pets were as common as other common wearables, the common pet floor would not be at 78 GHST right now.

Those are the types of disparities we’re hoping to close and to also capture some of that demand from underserved portions of the market.

The demand is already captured in the price, though. Hence, changing supply too drastically too fast won’t do much good. 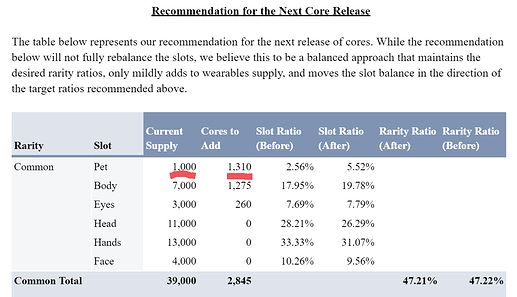 If I understand this correctly, the plan is to more than double the amount of common pets (maybe even in the very first sale)? This would likely do much more than counteract fomo trading. It would likely cause the ROFL price to plummet. I don’t think messing with peoples bags to that degree in that short amount of time is a good idea.

How would a pet that had opposite stats to a rofl affect rofl price? I’ve never bought a ROFL, never will, I don’t do mentally challenged gotchis therefore I’ll never own a ROFL but I would surely shell out for something I can actually use.

Seems like releasing 0 cores and simply having us smelt is a guaranteed win.

I just finished reading most of your work and it looks well polished.
I just have a few questions / points:

Regarding ranged vs melee weapons i did a quick study months ago. There is a big discrepency regarding commons, only 1000 melee weapons (pitchfork) vs 5000 ranged weapons (Basketball,
Fireball, Pitchfork, Common Wizard Staff, MK2 Grenade). To me you should also plan to address that. I see you do not plan to release any common hand wearable core, but maybe you should rethink that part.

As we are heading into pvp soon, I guess it would be very important to address this issue too to make pv p more diversified and enjoyable.

Hey frens, thanks for your feedback on the core framework thus far. We will be working on a scaled down core release for feedback as well. Understood that some will still prefer to wait on core release altogether which is fair. Let’s see if a scaled down version is better received and go from there.

Thanks for the detailed data, great to see such a thorough analysis.

Regarding of emission of new cores, you are suggesting that the wearable supply will not change since new alloy will not be minted, but aren’t we disregarding the possibility of people smelting a large number of low-rarity items to boost their gear in preparing for RF? If there are no new cores, then the forge will act as a great deflationary measure. However, if new cores are available, I am afraid that we could see dangerously large inflation on high-rarity wearables, diluting their supply and putting even more pressure on most wearables. We are already below Maall prices for many items, so the liquidity of our community is already critically low…

Maybe I am understanding this wrong, but I would appreciate clarification on this aspect.

The Forge team has made some revisions to our recommendations for the Core Framework as well as the release of new cores alongside The Forge. The original post has been edited and the docs linked there reflect our latest recommendations.

Here’s what we changed:

The “Cores to Add (Rounded)” column below reflects our current recommendations: 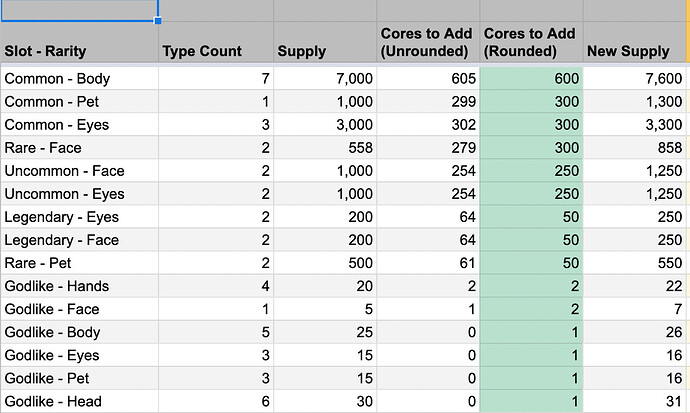 Regarding the concern raised by @gotchinomics - we would expect that some players will favor smelting lower rarity items to upgrade to higher rarity items, however the supply of wearables is still limited to the total number of cores in circulation (current supply + 2.6% if our new core release suggestion is adopted). As an example, today there are 5,575 legendary cores contained in wearables- if we add the 100 legendary cores as suggested in our latest update, the supply of legendaries still cannot exceed 5,675.

It’s true that the supply of lower rarities could decrease by a factor greater than higher rarities- for example if 10% of commons are smelted, but only 5% of rares are smelted, etc. That would also create an excess supply of common cores and a market premium on rare cores as a counterbalancing effect. Important to remember that all of that smelting activity provides 10% alloy value capture at each iteration which is also a strong economic counterbalance.

Looks great! Thanks for erring on the side of deflation. Are we getting close here? What’s the next thing that needs deciding?