According to the Oxford Dictionary and the normal day to day use, the word fake has a negative connotation: fake, n.2 and adj. : Oxford English Dictionary.

As a noun, beside other meanings, is this: A person who behaves in a manner contrary to his or her true feelings or nature; an insincere, pretentious, or affected person; a hypocrite, a poseur, a phoney.

As an adjective: Counterfeit, imitation, falsified, simulated, spurious; not genuine; bogus, phoney. Of a person: claiming to be, or masquerading or posing as, something that one is not. Also: intended to deceive; relating to or associated with the act of faking something.

I am sure we as a community can come up with better naming for something that is supposed to be mentioned by press and art world.

I would also like to create a sigprop in the near future to at least give PC a community temperature check with this question: Do you consider the name “FAKE Gotchis” an appropriate name for the art collection curated by the Aavegotchi community? YES/NO.

I do support ugglys, at least they are not fake.

No-one gets that though when they see or hear it.

Well where is someone just hearing it where it can’t also be explained? The whole process would need to be explained regardless. " You need to buy this card, then make sure it’s the right size, then you can choose how many you want up to 100"

Maybe we could rename it to Pro Genocide Collection, because we can then explain what it means so it’s all hunky dory again. do’h

I would also prefer in the long term, to have a temperature check from the DAO with all these detours (Fakes and other things) from the real gameplay. But this does not seem to happen and here we are. I do not see any core prop on the ART experiment put here: Snapshot . Taking decisions as PC without any consultation with the DAO is okay, but you can also have at least a temperature check to see, as people are not inclined to be against one thing or the other on their own.

I think this would be overstepping our purpose as a DAO. We don’t control PC, the DAO should be working alongside PC with things like the forge.

FAKE word is part of the web3 MEME culture and FAKE Gotchis is the perfect name in all its meanings, it’s conceptually & phonetically brilliant. Art is the medium, MEME is the message.
LFGOOOOOTCHIS!!!

Maybe you can call them ‘FAUXgotchis’ - rolls off the tongue, more playful sure but not the hard sound of FAKE and a more mischievous rascally feel (or I could be reaching lol). Am currently job-searching in between posting this, apologies.

Although it’s too late now to change, we could use “F.A.K.E. Aavegotchis” to clear any confusion.

how do you support UGGLY but are offended by FAKE?

You can’t miss it at all. Its a part of the branding. 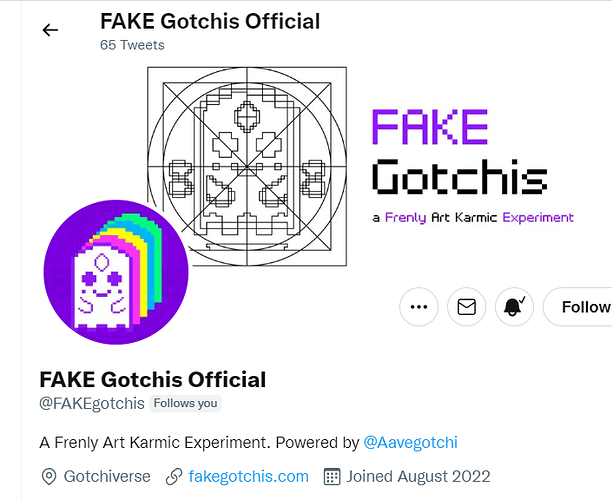 unfortunately people that don’t like this name appear to not understand NFT culture.

exactly. not sure the majority of these responses understand the NFT art world

Lol, I am not offended, where did you get that? I am presenting a fact - that fake has a negative connotation from every perspective you look at it, for someone that does not have the previous know-how about what it stands for (an acronym for Frenly Art Karmic Experiment). In most of the situations, first impression matters alot, and hearing about FAKE SMTH, where SMTH is not wisely set to another adjectival antithetical noun like Fake Rares, means that it s actually a FAKE. Fake Rare is really nice because of he two adjectives / nouned adjective in antithesis. FAKE Gotchies are basically FAKE Gotchies, and there s lots of fake gotchies collections on OpenSea or Rarible. Explain that to a newbie that your fake gotchies collection is not really fake versus an actually fake one.

Ugliness or beauty is in the eye of the beholder, but fake is just a fake, it has a logical and mathematical proof, there is no discussion about it. What is more concerning though is this fact: to be a FAKE Gotchi, the art piece should be original? But literally the whole concept of FAKE Gotchi is copy pasta of Fake Rare (ironical, right)? And a lot of the currently fake gotchies in the queue are not original per se, you take a gotchi, you smash some ideas on it, and you get a non-original art. It is called a derivative art. It is original from the sense of a derivative art. An example: if you have Mona Lisa, that is the original art. If you make a cybertronic Mona Lisa, that is a derivative art and not an original art per se.

you can just say you don’t care about NFT art or meme culture. that’s fine. but you trying to justify an incredibly pointless conversation is just a waste of all of our time. but you have the right to waste people’s time because we are a DAO.